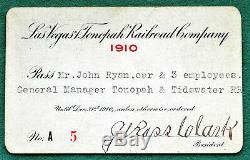 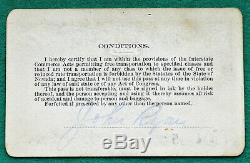 1910 Las Vegas & Tonopah Railroad pass. Issued to John Ryan, the general manager of the Tonopah & Tidewater Railroad, for use of his private car on the LV&T and has his signature on the reverse. Also note that this is a low number (A 5) pass with an original signature (not printed) of J. The LV&T ran from Las Vegas, Nevada on the San Pedro Los Angeles & Salt Lake (later the Union Pacific) to Goldfield servicing the gold and silver mines of the region. The T&T started at Ludlow, California on the Santa Fe extending to Gold Center (near Beatty, Rhyolite and Bullfrog NV) and was originally built to serve borax mines in the Death Valley area (the Lila C and Ryan mines owned by Francis Marion "Borax" Smith) with an outlet to southern California via the AT&SF.

Both of these railroads are long-gone... The LV&T was scrapped in 1918. The item "Las Vegas & Tonopah & Tidewater pass, Nevada railroad, gold mining LV&T T&T UPRR" is in sale since Sunday, August 4, 2019. This item is in the category "Collectibles\Transportation\Railroadiana & Trains\Paper\Passes & Tickets". The seller is "stonecabin" and is located in Reno, Nevada.