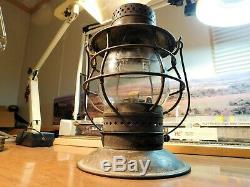 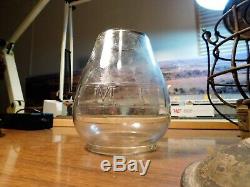 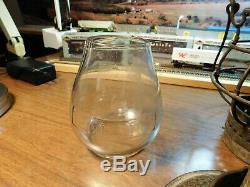 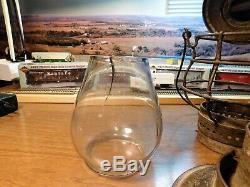 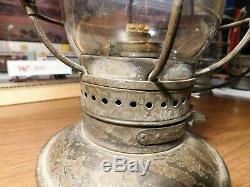 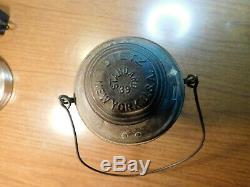 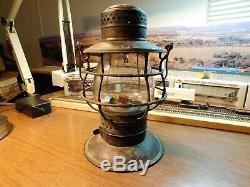 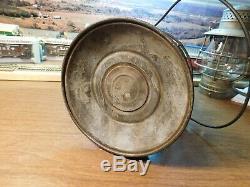 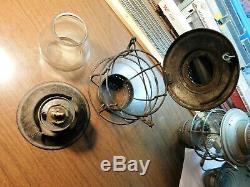 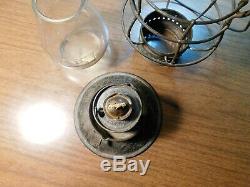 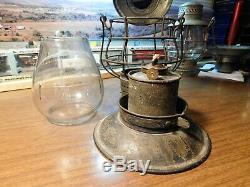 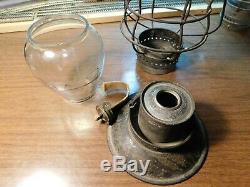 This is a nice piece of vintage Railroad History. The frame was made by DIETZ and the globe is made for the MISSOURI PACIFIC RAILROAD.

This Bell Bottom lantern is marked DIETZ NEW YORK U. The extended clear glass globe is embossed M. Globe has one crack and one chip on top rim.

The brass Burner is marked DIETZ N. The twist off drop font is marked DIETZ NEW YORK U. And both are in working condition. The frame was paint black at one time and the crack is not very noticeable. "#39" and "#39 Standard Models". The "39" and its successor, the "#39 Standard", appeared to be the Dietz Company's line of brakemen's lanterns with a bellbottom-base.

The "#39" was introduced in 1887 according to. And was succeeded by the "#39 Standard" which was in production from around the turn of the 20th century to the 1940's. Over this period of time, the design of the frame underwent substantial changes, so that today's collector can find a number of different variations. From Wikipedia, the free encyclopedia. The Missouri Pacific Railroad reporting mark.

MP , commonly abbreviated MoPac , with nickname of The Mop , was one of the first railroads in the United States. West of the Mississippi River. MoPac was a Class I railroad. Growing from dozens of predecessors and mergers, including the St. Louis, Iron Mountain and Southern Railway. (SLIMS), Texas and Pacific Railway. (TP), Chicago and Eastern Illinois Railroad.

(an early predecessor of MP in Kansas and south central Nebraska), and joint ventures such as the Alton and Southern Railroad. In 1967, the railroad operated 9,041 miles of road and 13,318 miles of track, not including DK&S, NO&LC, T&P and its subsidiaries, C&EI and Missouri-Illinois. On January 8, 1980, the Union Pacific Railroad. Lawsuits filed by competing railroads delayed approval of the merger until September 13, 1982. After the Supreme Court denied a trial to the Southern Pacific, the merger took effect on December 22, 1982.

However, due to outstanding bonds of the Missouri Pacific, the merger with Union Pacific become official only on January 1, 1997. On July 4, 1851, at St.

The first section of track was completed in 1852; in 1865, it was the first railroad in Kansas City. After construction was interrupted by the American Civil War. In 1872, the Pacific Railroad was reorganized as the Missouri Pacific Railway by new investors after a railroad debt crisis. Because of corporate ties extending back to the Pacific Railroad, Missouri Pacific at one time advertised itself as being The First Railroad West of the Mississippi.

From 1879 Missouri Pacific was under the control of successful but controversial New York financier Jay Gould. Until his death in 1892. Gould developed a system extending through Colorado. Inherited control upon his father's death. The younger Gould lost control of the company after it declared bankruptcy. In 1917 the line was merged with the St.

(SLIMS) and reorganized as the Missouri Pacific Railroad. Missouri Pacific later acquired or gained a controlling interest in other lines in Texas, including the Gulf Coast Lines. And the Texas and Pacific Railway. MoPac declared bankruptcy again in 1933, during the Great Depression.

The company was reorganized and the trusteeship ended in 1956. By the 1980s the system would own 11,469 miles of rail line over 11 states bounded by Chicago.

To the east, Pueblo, Colorado. In the west, north to Omaha.

And southeast along the Gulf seaports of Louisiana. MoPac operated a fleet of more than 1,500 diesel locomotives. Under the leadership of Downing B.

Jenks, who became president and chief executive in 1961 the company became a pioneer in the early days of computer-guided rail technology. It was a major hauler of grain, TOFC (Trailer on Flat Car), coal, ore, autos and dry goods. At the time of their mega-merger in 1982 the MoPac owned newer locomotives, more locomotives and operated more track than partner Union Pacific Railroad. On December 22, 1982 the Missouri Pacific merged with Union Pacific and Western Pacific Railroad.

Companies to create the largest system in its day, the "Pacific Rail Systems, " under the holding company. Union Pacific Corporation, but maintained its own corporate and commercial identity. On December 1, 1989, the Missouri Kansas Texas. And the Galveston, Houston & Henderson.

UP continued to use the MoPac headquarters building at 210 N. Louis for its customer service center until February 15, 2005. The former MoPac building has undergone rehab as apartments and is now known as Park Pacific. New Orleans & Lower Coast. In this table "MP" includes New Orleans Texas & Mexico and all its subsidiary railroads Beaumont Sour Lake & Western, I-GN, StLB&M, etc.

That officially merged into MP in 1956. Ton-miles for C&EI in 1970 presumably don't include the L&N portion.

; operated route-miles totalled 2259 at the end of 1929 (after C&NE, PVS and TSL had become subsidiaries) and 2033 at the end of 1960. The Scenic Limited leaving St. Missouri Pacific's Colorado Eagle , waiting to depart St.

Louis's Union Station on April 17, 1963. In the early years of the 20th century, most Missouri Pacific and St.

Louis, Iron Mountain and Southern passenger trains were designated by number only, with little emphasis on premier name trains. This changed in May, 1915, with the inauguration of the Scenic Limited.

The Scenic Limited operated through the Royal Gorge. Over the tracks of the Denver and Rio Grande Railroad.

From Salt Lake City to San Francisco. The Scenic Limited operated over the Western Pacific Railroad. A second premier train, the Sunshine Special.

Began operating on December 5, 1915, between St. Another named train, the Rainbow Special. Was placed in service in July 1921 between Kansas City and Little Rock. The Sunshine Special soon eclipsed the other trains in travel volume, becoming the signature train of the Missouri Pacific Railroad.

An advertising slogan in 1933 proclaimed: " It's 70-degrees in the Sunshine when it's 100-degrees in the shade , " referring to the fact that the Sunshine Special was one of the first air-conditioned trains in the southwest. When new streamlined trains were delivered, the Scenic Limited and Rainbow Special names faded, but the Sunshine Special had sufficient name recognition to co-exist along with the new streamliners. Era, the Missouri Pacific's premier passenger trains were collectively known as the Eagles. A variety of Eagle trains were operated, with the first such train inaugurated in 1940. Eagle routes included the Missouri River Eagle. Louis to Kansas City and Omaha, the Delta Eagle. Louis to Pueblo and Denver. MOPAC newspaper ad for travel to a livestock show, 1922.

Louis to New Orleans, via Little Rock. Southern Scenic (between Kansas City and Memphis). Missouri Pacific gained a reputation for aggressively discontinuing passenger trains after the mid-1960s, and when the National Railroad Passenger Corporation Amtrak. Assumed passenger train operations on May 1, 1971, the St.

Louis to Kansas City route was the only Missouri Pacific route to be included as part of Amtrak's basic system. On March 13, 1974, Amtrak restored passenger train service over segments of Missouri Pacific- Texas and Pacific.

General use of this herald spanned from 1974 to 1984 (1983 for general equipment, 1984 for documents). In the early days of steam, the MP generally used gold. Lettering on its steam locomotives. This was further broken down by using two different lettering styles: Block for the numbers and Roman for the lettering (including subsidiary markings and classifications). Baldwin became president of the Missouri Pacific in April 1923, the color of the lettering changed to aluminum.

The Missouri Pacific was known for its "Eagle" color scheme designed by Raymond Loewy. It consisted of dark cerulean. EMD SD70ACe locomotive, painted in MoPac livery. Throughout the 1960s and 1970s a handful of railroads began to paint their locomotives one or two simple colors without excessive striping, lettering, etc.

However, under the Downing B. Presidency, the Eagle Scheme was discontinued because Mr. Effective April 28, 1961, all locomotives (new or to be repainted) were to receive an alternative version of dark cerulean, from which the term "Jenks Blue" is derived (also sometimes called "Dark Eagle Blue").

The first new scheme attempt by the Missouri Pacific was a'simple logo-simple scheme' design. Originally planned for the locomotive to be completely painted armour yellow (including trucks, frame, and fuel tank) with the application of the Missouri Pacific 20-inch lettering along the carbody and a buzzsaw logo on the nose and air equipment doors. The plan was then revised to now have a black frame, trucks, and fuel tank. The final revision introduced the unit to be repainted in a standard Union Pacific scheme with'MISSOURI PACIFIC' instead of'UNION PACIFIC' lettering along the carbody.

Rio Usumacinta at the Wichita Falls Railroad Museum. Once the test scheme was completed, the lettering was deemed unsatisfactory due to the word'MISSOURI' being too large to fit on smaller four-axle carbodies. Effective May 14, 1984, the Union Pacific scheme was to be used, but in substitution of the Union Pacific'Jinx' typeface, a renovated version of lettering was used. Using the type style seen on Missouri Pacific reporting marks and locomotive numbers,'North Little Rock' lettering was used, as it fit the large and small carbodies decently.

On January 1, 1986, the scheme was discontinued after the consolidation of the Missouri Pacific & Union Pacific operating departments. To this day, the paint scheme remains controversial among management, employees and rail fans. On July 30, 2005, UP unveiled a brand new EMD SD70ACe.

With Missouri Pacific paint and logos, as part of a new heritage program. The item "MISSOURI PACIFIC RAILROAD LANTERN DIETZ STANDARD 39 M. 1895" is in sale since Sunday, February 9, 2020.