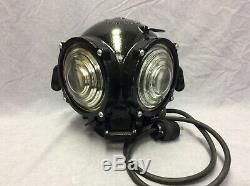 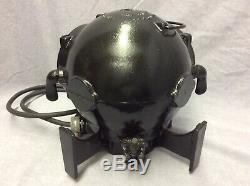 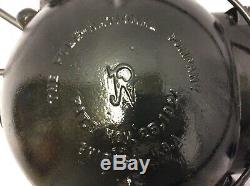 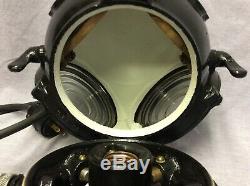 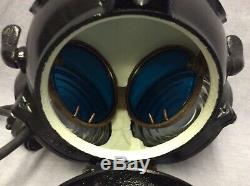 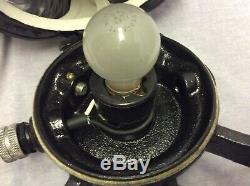 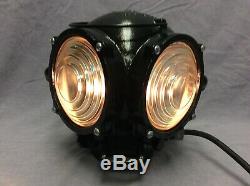 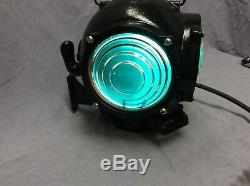 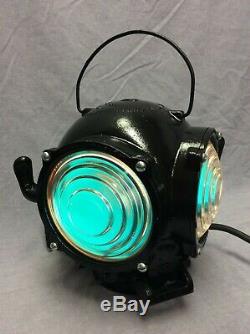 This is a vintage Pyle-National railroad locomotive Classification Lamp. It is fully restored to display ready condition. All lens (2 clear, 2 green) are in excellent condition. There are 2 external levers that when turned rotate the internal green lens into place to properly identify the classification color for the locomotive.

The two internal lenses are marked Corning, and the lamp housing is marked on top The Pyle National Company Chicago, USA Patd Nov. The lamp has been rewired with OEM wire to the original socket which has been fitted with a 110v 15 watt bulb - the lit classification colors are shown in photos 7, 8, & 9. The purpose of classification lights was to help identify the train on which they were displayed. The two colors and their meanings were as follows.

Indicated an "extra" train not shown in the timetable. For much of railroad history, train-movement authority was granted by timetables.

If a train was listed in the timetable, it had the authority to operate according to its printed schedule. Deviations from the timetable, such as a train running late, were handled with train orders from the dispatcher.

Under this "timetable-and-train-order" system, it was important that trains kept as close to schedule as possible, and that any special trains not shown in the timetable be clearly identified as such with a white light. Indicated that, while the train displaying the lights was a regularly scheduled one, a second section was following behind it.

This was done, for example, when ridership demand exceeded the capacity of a single passenger train. If there were too many passengers for a single section of, say, New York Central's 20th Century Limited, a second section was operated, and, if needed, a third, fourth, fifth, and even sixth. The engine of each section except the last would display green lights.

While each section was a separate entity, the timetable's "train 25" would not be considered to have passed a given point until the last section of the train had gone by. For operational convenience, special trains that otherwise might have carried white "extra" signals were sometimes operated as advance or second sections of regular, but unrelated, trains. This lamp would make a great addition to any Pyle National, lamp, or railroadiana collection. Please see my other items listed. Please let me know if you have any questions. The item "Pyle National Railroad Locomotive Classification Lamp" is in sale since Thursday, September 19, 2019. This item is in the category "Collectibles\Transportation\Railroadiana & Trains\Hardware\Lanterns & Lamps".

The seller is "wdpstation" and is located in Carlsbad, California. This item can be shipped to United States.