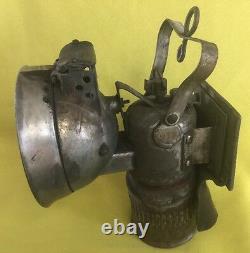 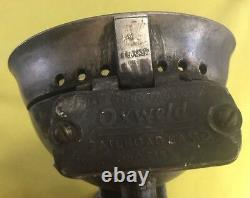 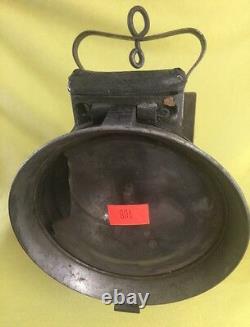 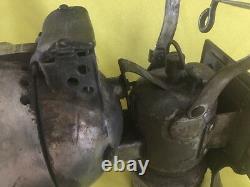 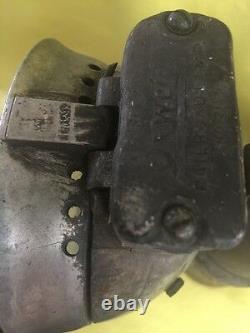 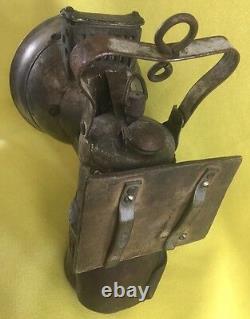 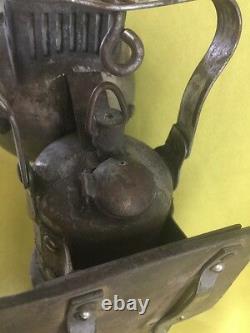 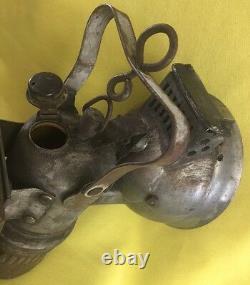 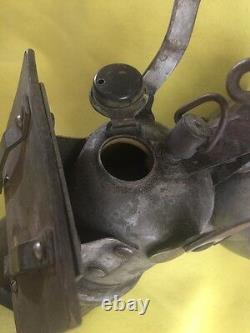 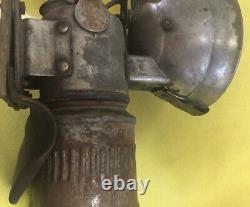 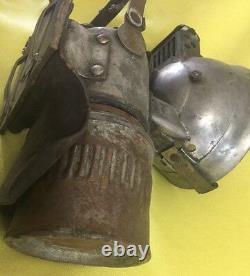 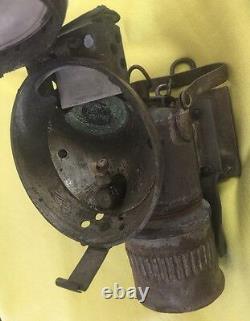 The upper reservoir was found to be empty with no water remaining; their is rust stains visible inside this chamber which is prevalent from constant water saturation during use. The cap to the chamber remains intact and is able to open and close freely. The threaded valve that screws through the top of this water reservoir adjusts smoothly. This controls the rate at which the water is allowed to drip into the lower chamber which contains the calcium carbide. The lower chamber easily unscrews to reveal a fair amount of calcium hydroxide along the sides of the cup.

After all of the carbide in a lamp has been reacted, the carbide chamber contains a wet paste of slaked lime (calcium hydroxide). This is emptied into a waste bag and the chamber can be refilled.

Front glass bezel is broken. To understand how this lamp operates; Please See; Mechanism Overview (below). The Carbide Lamp, it's History and Uses.

Carbide lamps, or acetylene gas lamps, are simple lamps that produce and burn acetylene (C2H2) which is created by the reaction of calcium carbide (CaC2) with water. Acetylene gas lamps were used to illuminate buildings, as lighthouse beacons, and as headlights on motor-cars and bicycles. Portable acetylene gas lamps, worn on the hat or carried by hand, were widely used in mining in the early twentieth century. They are still employed by cavers, hunters, and cataphiles.

A mining or caving lamp has calcium carbide placed in a lower chamber, the generator. The upper reservoir is then filled with water. A threaded valve or other mechanism is used to control the rate at which the water is allowed to drip into the chamber containing the calcium carbide. By controlling the rate of water flow, the production of acetylene gas is controlled. This, in turn, controls the flow rate of the gas and the size of the flame at the burner, and thus the amount of light it produces. This type of lamp generally has a reflector behind the flame to help project the light forward. An acetylene gas powered lamp produces a bright, broad light. Many cavers prefer this type of unfocused light as it improves peripheral vision in the complete dark. The reaction of carbide with water produces a fair amount of heat independent of the flame. In cold caves, carbide lamp users can use this heat to help stave off hypothermia. When all of the carbide in a lamp has been reacted, the carbide chamber contains a wet paste of slaked lime (calcium hydroxide). Small carbide lamps called "carbide candles" or "smokers" are used for blackening rifle sights to reduce glare. They are used because of the sooty flame produced by acetylene. In 1892, Thomas Willson discovered an economically efficient process for creating calcium carbide in an electric arc furnace from a mixture of lime and coke. The arc furnace provides the high temperature required to drive the reaction. [4] Manufacture of calcium carbide was an important part of the industrial revolution in chemistry, and was made possible in the US as a result of massive amounts of inexpensive hydroelectric power produced at Niagara Falls before the turn of the twentieth century.

Domestic lighting with acetylene gas was introduced circa 1894 and bicycle lamps from 1896. In France, Gustave Trouvé, a Parisian electrical engineer, also made domestic acetylene lamps and gasometers. The first carbide mining lamp developed in the United States was patented in New York on August 28, 1900 by Frederick Baldwin. [6] Another early lamp design is shown in a patent from Duluth, Minnesota on October 21, 1902. [7] In the early 1900s, Gustaf Dalén invented the Dalén light.

This combined two of Dalén's previous inventions: the substrate Agamassan and the Sun valve. Inventions and improvements to carbide lamps continued for decades. On March 10, 1925 Andrew Prader of Spokane, Washington was granted a United States Patent, number 1,528,848 for certain new and useful improvements for Acetylene Lamps. After carbide lamps were implicated in an Illinois coal-seam methane gas explosion that killed 54 miners, the 1932 Moweaqua Coal Mine disaster, [9] carbide lamps were less used in United States coal mines. They continued to be used in the coal pits of other countries, notably Russia and the Ukraine. In the birth of the cinema of Iquitos, a carbide lamp was used as light support to project the first film in the Casa de Fierro, in 1900.

Carbide lighting was used in rural and urban areas of the United States which were not served by electrification. Its use began shortly after 1900 and continued past 1950.

Calcium carbide pellets were placed in a container outside the home, with water piped to the container and allowed to drip on the pellets releasing acetylene. This gas was piped to lighting fixtures inside the house, where it was burned, creating a very bright flame. Carbide lighting was inexpensive but was prone to gas leaks and explosions. Early models of the Ford Model T automobile used carbide lamps as headlamps. Acetylene lamps were also used on riverboats for night navigation.

The National Museum of Australia has a lamp made in about 1910 that was used on board PS Enterprise, a paddle steamer which has been restored to working order and also in the museum's collection. They are also used for night hunting. Early caving enthusiasts, not yet having the advantage of light-weight electrical illumination, introduced the carbide lamp to their hobby. [11] While increasingly replaced by more modern choices, a substantial percentage of cavers still use this method.

In cave surveys, carbide lamps are favoured for the lead or "point" surveyor, who must identify suitable points in the cave to designate as survey stations. The sooty carbide flame may be used to mark cave walls with a station label. Especially favoured for this purpose are all-brass lamps or lamps made with no ferromagnetic metals, as these lamps do not deflect the needles of a magnetic compass, which is typically read while brightly illuminated from above using the caver's lamp.

Apart from their use as cave surveying tools, many cavers favour carbide lamps for their durability and quality of illumination. They were once favoured for their relative illumination per mass of fuel compared to battery powered devices, but this advantage was largely negated with the advent of high-intensity LED illumination. The acetylene producing reaction is exothermic, which means that the lamp's reactor vessel will become quite warm to the touch; this can be used to warm the hands. The heat from the flame can also be used to warm the body by allowing the exhaust gases to flow under a shirt or poncho pulled out from the body, a technique discovered almost immediately by cold miners, and nicknamed by cavers the "Palmer furnace". Handbook of Inorganic Chemical Compounds. The Science Teacher, 63(5), 30. "The Manufacture of Calcium Carbide". Journal of the American Chemical Society. The Chemical News and the Journal of Physical Science. Fifty-First Annual Coal Report of Illinois, 1932, Department of Mines and Minerals.

On a case-by-case basis we will sell to YOU at cost with our Primary Objective; furtherance of the Gospel. We will try our best to get for YOU what YOU need to YOU at the lowest possible cost. Just simply; send us a note and we will be in contact with YOU momentarily. Thank YOU for YOUR Service.

How long will it take to receive my order? Although it is rare for international orders to get lost or delayed, please be aware that it can happen. Depending on your location, courier selection, and any history of similar problems, we'll work to help resolve this issue.

Please know that we do try to adhere to each countries individual import policies. Dollars and allow the customers card issuing company to process the conversion.

By ordering from us, you agree to our policies above. We reserve the right to change these policies at any time, and we also retain the right to refuse service to any customer at our sole discretion. See exemptions below (If unsure text us first before making any assumptions).

As per store policy; after we receive the item. Food items and non-prescription drugs are non-returnable.

Photo(s) showing the DAMAGED GOOD or PRODUCT? These 3 Photos are required.

If you do not provide them; we cannot file a claim; therefore you will not be compensated. We offer quantity discounts on just about every item we sell. We usually have MORE AVAILABLE...

Text us for quotes on larger quantities. We will be gladly to help you with our best of knowledge. Once you have received your item, please leave feedback for us as this will inform us that you have received your items. EACH CUSTOMER IS #1; We are here to serve YOU and YOUR Needs. We are here to help! Let us know if we can Help... This item is in the category "Collectibles\Transportation\Railroadiana & Trains\Hardware\Lanterns & Lamps". The seller is "2014shenf" and is located in this country: US. This item can be shipped to United States.